The true Overlord Zenon is a legendary Overlord from Disgaea 2: Cursed Memories, known to some as the "God of All Overlords", who became infamous for being strong enough to kill 99 Overlords and 1000 other Demon Lords in a single night.

After Zenon defeated the 99 Overlords, she noticed she was becoming something other than a demon, which led her to reincarnate herself as Rozalin, a girl born to the Snow Clan. The 100th Overlord in that battle began to believe that Zenon looked down on him due to being the only one Zenon spared, and thus tried to gain revenge on Zenon by taking her name and raising her reincarnation to have a meaningless life and to have her praise and idolize him as her father.

The true Zenon would not resurface until Rozalin and Adell's battle with Laharl, who after defeating the party decides to smash Rozalin's seal. Claiming to be a being of solitude, Zenon fights Laharl and quickly overwhelms him, forcing him to retreat. After Laharl leaves, Adell manages to return Rozalin to normal. During the battle with the false Zenon, the true Zenon convinces Rozalin to shatter the seal if she wishes to help her friends. She does so, and Zenon resurfaces, managing to kill the false Zenon with a single blast. Zenon then turns on Adell and his party, but in the good ending, Adell manages to return Rozalin to normal with a kiss.

In the Worst Ending, however, Adell battles Zenon and ends up killing Rozalin. Feeling guilty about what he had done, Adell stands there in shame, but this shame turns to fear as the spirit of Zenon appears and enters his body. Now in control of Adell's body, Zenon declares that he is a being of solitude, and proceeds to attack and devour Taro and Hanako.

While not making any personal appearance during the game, Zenon is an unlockable color for Rozalin.

Zenon appears indirectly in Disgaea D2, as not only Rozalin can change her palette swap for the Overlord's but also her own personality.

Disgaea 5 is Zenon's first playable appearance since Disgaea 2. Here the Overlord makes an appearance as Rozalin's Overload, Severe Aeshma, which even grants her use of the Dark Liberation special skill. 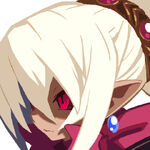 True Zenon in her past life

Adell, after being possessed by True Zenon, as he appears in the Worst Ending. 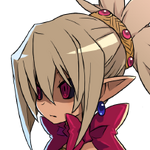 True Zenon's portrait in Disgaea 5.
Add a photo to this gallery