Wendee Lee
Big Sis Prinny is a character in Disgaea: Hour of Darkness.

Although she is a Prinny and retains their appearance, Big Sis Prinny is unique among the prinnies as she sports a red-tinted coat.

Big Sis Prinny is a member of Etna's Prinny Squad and stands out thanks to her pink colour and different mannerism. Her speaking pattern also differs from that of the regular prinnies in that she does not end her sentences with "dood", although she tries to fake it during Chapter 8.

In the squad, she acts much like an older sister (hence the name), always looking out for the other prinnies and wishing for their well-being. Her care extends beyond the Prinny Squad however, as it was she who was responsible for giving Flonne the medicine when her pendant was stolen.

While alive, she was a human witch, who prior to her death had come to the Netherworld to study. She was condemned to prinnyhood for having committed the greatest sin of all: suicide. It is when Laharl sees her human form that it is first revealed that she was in fact his mother. Laharl had contracted an incurable disease, and only one thing could save him - the life of one who loved him. It was due to this sacrifice that Laharl began to hate love. Flonne has noted that only by rejecting love and kindness was Laharl able to come to terms with his mother's death.

Big Sis Prinny makes her first appearance at the end of chapter 1, comforting the Prinny Squad after Laharl orders them to carry the loot from Vyers' Castle, hinting at the Red Moon. She is next referenced during the Gift from an Angel Episode, in which she gives Flonne a medicine that helps her against the heat of 'Blazing Core'. After that, she appears during the Reincarnation Episode, where she hints at where the Prinnies are going. She later appears telling Laharl not to interfere with death's work. She tells him that if he has any love for his subordinates, he should let them reincarnate, causing him to realize that reincarnation was beneficial to the Prinnies. After realizing that Laharl has in fact accepted love, she decides to reincarnate with the rest of the Prinnies, saying that if they were eventually fated to part, it would be better for her to watch from a distance than to hold him in her arms, and cause greater sorrow. After saying that the prince has met a wonderful person (referring to Flonne), she finally reveals herself to be Laharl's mother and disappears.

Although not physically present within the game, Laharl's mother is mentioned in passing by Lamington while he explains Sicily's unusual existence. Laharl's mother had committed suicide while pregnant with Sicily and upon having her prayers heard, she was given the option of having her daughter being born into Celestia. Thus, Sicily became an Angel with the blood of a demon. She was also the one who had given Sicily her name.

In the anime, Big Sis Prinny first appears when she saves the party from a burning building (she also makes a small cameo apperance near the end of episode 4. She is in the background in one of the scenes). She was the only prinny that did not support the founding of the country of Prinnyland.  Instead of visiting the Netherworld to study, she was kidnapped by an unknown demon, and was rescued by King Krichevskoy, who fell in love at first sight. Later, she fulfills the same role as in the game, telling Laharl not to interfere in the reincarnation of the Prinnies. The only difference in this scene is the presence of Vyers. After seeing him trying his best not to cry, she leaves in tears.

Rough Sketch of her human form 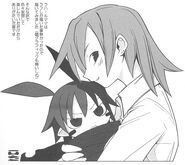 Picture of baby Laharl and his mother, drawn by Takehito Harada for a comic collection book.

The king meets his bride for the first time (Anime)

I want you to treat everyone with kindness and love (Anime)

The queen decides to sacrifice herself to save Laharl (Anime)

The Queen and Laharl (Anime)
Community content is available under CC-BY-SA unless otherwise noted.
Advertisement