The Beastmaster is a humanoid class unit that first appeared in Disgaea 2: Cursed Memories, and reappears in Disgaea 3: Absence of Justice.

A Beastmaster becomes available after capturing a monster (tossing it into the Base Panel), then passing the bill in the Dark Assembly titled "Make a Beast Tamer".

Their special ability allows them to raises the stats of nearby allied monsters by 20%; Lover specialists increase this by +1% per Lover level. They also have a second, unmentioned ability that allows them to gain double points on the Bonus Gauge.

Their first special, Wild Groom, allows a monster to gain an extra 50% EXP and mana. The second ability, Domination, increases the Offensive stats (ATK, INT, HIT) of monster characters by 20%.

Beast Masters mostly resemble the Valkyrie in terms of stat-growth, their high ATK, HIT and SPD benefiting from mastery in (nearly) all physical weapons in exchange for slightly lower HP and somewhat squishy defenses. Beast Masters are best used as back-up units alongside tankier characters, most often the monsters they serve to reinforce; their ability to combo adding to the Bonus Gauge.

The top leading group of beast tamers. They live alongside beasts so they tend to have short tempers.

Beastmasters wear medallion-studded bracers to protect themselves from animal bites. It's unknown if their tails are real. 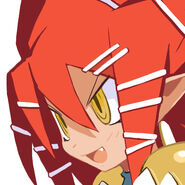 Beastmaster - Disgaea 2: Cursed Memories
Add a photo to this gallery
Retrieved from "https://disgaea.fandom.com/wiki/Beastmaster_(Disgaea_2)?oldid=47219"
Community content is available under CC-BY-SA unless otherwise noted.