“If you want me to do something, give me very specific orders!”
—Barbara, Disgaea D2: A Brighter Darkness

Barbara is a female demon warrior and a playable character in Disgaea D2: A Brighter Darkness. She was selected by the Krichevskoy group to replace Laharl as Overlord.

Barbara appears in front of the party after having her name called out. She states that she's been waiting for the party to appear for an entire day. Rainier asks why she didn't make her presence known so they could have formulated a plan and Barbara retorts back saying that nobody called her. The Krichevskoy Group mentions that they chose Barbara specifically as their candidate for Overlord because she only takes orders and thus would serve perfectly as their puppet, with the Krichevskoy Group pulling her strings. She attacks the party and swiftly loses, stating afterward that she was not told to win the battle, only to engage in battle. Losing this battle instead causes Barbara to become the Overlord for a time, but her blind obedience causes her to lack the necessary charisma to be Overlord and the Netherworld quickly falls right back into chaos.

Barbara is later fought again when storming the Crystal Castle, as she is ordered to keep anyone away from the magic repelling wall, and follows through on this order even when the wall begins to trigger a collapse of the Netherworld with the Krichevskoy Group trapped inside. After being again defeated by Laharl, Barbara leaves. Losing this battle by letting the timer run out, or by defeat when having sufficient ally kills, causes the wall to remain up for too long, leading the entire Netherworld to collapse into a black hole.

Barbara is encountered one final time at the Netherworld's Maw, having been recruited by Xenolith to bring the captured angels there. During this encounter, Sicily angers Barbara by making a request rather than an order, resulting in a third battle. After the battle, Barbara becomes a vassal under Laharl for the remainder of the storyline, with a flimsy justification by Laharl that he'll supposedly teach her to think for herself. Once again it is possible to earn a bad ending by losing to Barbara, wherein if Flonne has raised at least three other characters to five hearts of likeability, she turns around and unleashes a love-powered finishing move using her Archangel powers that defeats Barbara, only to be unable to stop the attack and accidentally completing the Netherworld's conversion into a second Celestia.

After the storyline, Barbara is removed from the party until the appropriate bonus stage is cleared, in which she has begun taking orders from a cat.  After driving off the cat and defeating Barbara one more time, she joins for good. This is the only fight with Barbara that does not have an associated bad ending.

Barbara, psychically, is an adult demon woman. As she is an Armor Knight, her outfit and form-fitting armor is virtually identical, except her armor is pink purple in color. However, her neck tie is still pink, while her clothes under her armor and cloth drape are still dark blue and black in color like her fellow Armor Knights. Another common trait she has with other Armor Knights is her dark red eyes and a black hair band. However, unlike the other Armor Knights, Barbara stands out in the sense that instead of having long flowing purple hair, Barbara has neck length green hair, making her somewhat unique among them.

Barbara shows much discipline, being very order-centric and lacking total independence. She refuses to do anything unless she is ordered to do so, even going so far as coming a day early and refusing to come out until her name was called.

Barbara is similar to an Armor Knight except boasting better strength when it comes to her skills. She is released from the party following completion of the game and must be recruited again to be used in the post-game. After recruiting her in the post-game, players will unlock the trophy, Red Barbara. 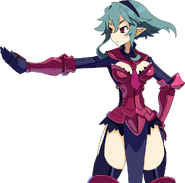 Barbara's Cut-in image in Disgaea D2.
Add a photo to this gallery

Retrieved from "https://disgaea.fandom.com/wiki/Barbara?oldid=43921"
Community content is available under CC-BY-SA unless otherwise noted.