Super Hero Aurum is the main antagonist of Disgaea 3: Absence of Justice. He was once a revered human hero, known for having taken down countless numbers of demons. According to the game, a lot of media and memorabilia was printed about him including his own comic book series, video games, line of action figures, posters and so on. Aurum also came up with the Hero's Oath, 8 sayings of what makes a hero.

200 years prior to the story, Aurum came upon Mao, who, in a fit of rage against his father, told Aurum all of his weak points. Despite killing Mao's father, by using his knowledge of his weaknesses he found the battle ungratifying and not the great battle he had wished for, and he began wondering whether he should fade into obscurity.

Mao, traumatized by his actions, attacked Aurum, giving the human an idea: If he couldn't find a worthy opponent, why not create one? He then transforms into Geoffrey, Mao's butler, and spent the better part of 200 years grooming Mao into the perfect opponent.

During the final chapter, Aurum initially dismisses Mao as being no threat or challenge, since he refused to give in to his dark powers, but becomes shocked when Mao begins displaying the powers of love and courage he had given up.

In the final fight, Aurum states that during his adventures, he had stored the various parts of other Overlords he defeated inside his body after purifying them. He then displays this, transforming into a Dark God, according to his title. Despite this, he is defeated, and, before asking to be killed, apologizes to Mao and Almaz.

Depending on the player's actions, Aurum can have several fates. In the normal ending, Mao decides to keep him as an experimental subject. In the Super Hero Mao ending, he is goaded into continuing his work as Geoffrey.

However, if the player killed 99 allies prior to the end of Chapter 7, Mao gives in to his Dark powers, just as Aurum wanted. After pushing Mao over the edge by killing Raspberyl, who attempted to calm Mao down, he attempts to battle Mao, only to be killed off quite easily.

The Raspberyl DLC allows Aurum to become a playable character. Aurum is in his "Dark God" form while playable, but lacks a special Evility he had as a boss where he was immune to physical attacks on odd numbered turns and immune to magic on even numbered turns, and can Magichange into a Sword. His new Evility, "Super Hero Authority", raises stats by 3% per every enemy unit on the map. Aurum can also learn every offensive spell up to Omega. While in his sword form, the character wielding him can use a version of the Skill "Demon Slayer X". This version of the move is identical to the version of it used in Aurum's Comic Book that was shown at the beginning of the game (even down to the Blue "Dynamic" Background and the Text Bubbles), as well as a secondary Magichange skill called 'Ragnarok Death', where the human user uses Aurum's "wings" as an airboard and fires energy blasts from above, then finishing with a giant blast.

Because of the sheer size of Aurum's "wingpack", he has the largest character sprite out of all recruitable characters (with the only one bigger than him being Baal). 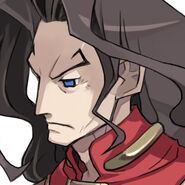 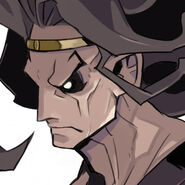 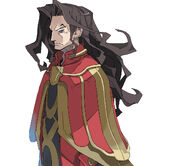 Aurum's bust in Disgaea 3
Add a photo to this gallery
Retrieved from "https://disgaea.fandom.com/wiki/Aurum?oldid=44323"
Community content is available under CC-BY-SA unless otherwise noted.