Asuka Cranekick is a character in Disgaea 3: Absence of Justice.

Asuka Cranekick is a Samurai Delinquent and one of Raspberyl's sidekicks, alongside Kyoko Needleworker. She follows Raspberyl everywhere, calling her "My Lady". Her name comes from the fact that if she defeats an opponent in battle, she sends them 1,000 paper cranes as a "Get Well Soon" gift. Like Raspberyl and Kyoko, Asuka partakes in Delinquent activities such as raising money for charity and completing homework on time.

Gameplay-wise, she is basically a pink recolor of the Female Samurai class, only with different Evilities and a proficiency with Spears instead of Swords. Unlike most main characters, she only has one unique skill, called Crane Dance. However, another technique called Fuma Crane can be unlocked in Raspberyl Mode. During this attack, she rides on a giant origami crane-shaped hang glider and rams the foe.

Asuka, along with Kyoko, are a one-pack DLC in Disgaea 4: A Promise Unforgotten. Their purchase also unlocks the Kunoichi Class.

Asuka retains her Crane Dance move from Disgaea 4, but Fuma Crane is renamed to "Grace Crane Change", she gains a new unique skill called "Paper Crane Copter" and her primary weapon forte is changed from spears to swords. She possesses three main evilities: "Beryl's Servant 2" which increases Attack by 50% when next to Raspberyl, "Nadeshiko's Form" which increases Attack by 30% if Asuka has full HP, and "Fight! My Lady!" which increases Raspberyl's evasion by 5% if the two are next to each other. 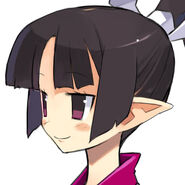 Asuka's Cut-in image in Disgaea 4.
Add a photo to this gallery

Retrieved from "https://disgaea.fandom.com/wiki/Asuka_Cranekick?oldid=47773"
Community content is available under CC-BY-SA unless otherwise noted.