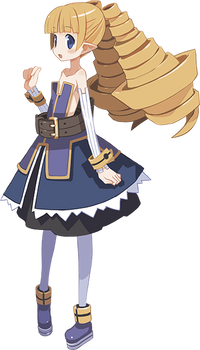 The Archer is a reoccurring humanoid class in the Disgaea series first introduced in Disgaea: Hour of Darkness.

Archers hail from the now all-female community of Badre (パドル), an icy mountain community. Archers have a unique social system lead by their ancestors, the Sevria. It is said that they are born from the roots of a large tree and that they can hear the spirit of the wind, which tells them the direction and power of the wind. They once lived alongside the Rangers, until a war broke out due to the Archers opposing the cold hearted nature of the Rangers. They wield Bows exclusively due to a strong sense of tradition and despise any other means of attack.

Archers can be created once the player has a character with level 3 Bow Mastery. A level 100 Archer is required to unlock the Angel class.

In Disgaea 2, Archers make a return as an unlockable class once a character achieves level 5 Bow Mastery, then pass the "Make a Lovely Hunter" bill. The Archer's innate ability allows for a longer attack range with bows. With some time investing in the Item World, an archer can have a 10-panel attack range.

The Archer returns in Disgaea 4. Both a level 15 Valkyrie and Healer are required to unlock them.

The Archer returns in Disgaea D2.

The Archer returns in Disgaea 5. They are unlocked by having a Martial Artist and a Warrior both at rank 2, then completing the necessary quest.

The Archers in Phantom Brave have the rare skill known as 'Quick Attack', which allows them to attack as soon as they are confined. Their highest skill mastery is that of Energy. If unarmed, Archers can use an attack that creates a short-ranged energy crossbow to attack.

The Archers in Makai Kingdom have a high TEC stat, which allows them to use the weapons of Rifles and Fans effectively.

Archer artwork from Disgaea 2: Cursed Memories
Add a photo to this gallery

Retrieved from "https://disgaea.fandom.com/wiki/Archer?oldid=46160"
Community content is available under CC-BY-SA unless otherwise noted.