Start a Wiki
Aramis is a minor character in Disgaea: Hour of Darkness. He is an NPC who appears in the chapter Of Being an Overlord.

Initially, Aramis is an extremely rude character, openly insulting both Laharl and Flonne. However, he does appear to be friendly and respectful towards Etna, something that perplexes the others. He is a zombie enthusiast; in all of his appearances, he is mentioned attempting to create the ultimate Zombie.

After Laharl completes the task Aramis set up for him, the boy shows more respect for Laharl, and is certainly more polite, calling Laharl "your highness".

In the original game and it's remakes, Aramis is brought before Laharl by Etna, who claimed to have found Laharl's 'First job as an Overlord'. Aramis' pets have gone missing, and he wants Laharl to help him find them. Laharl, initially, is enraged by this request and demands that Etna find another job more 'befitting' of an Overlord. She refuses, much to everyone's shock, and tells Laharl that if he does not help Aramis, she will never accept him as the Overlord.

It is swiftly revealed that Aramis' "pets" were in fact a group of Zombies. The foremost zombie of this group, Aramis' "masterpiece", was special, equipped with "the fists of a Dark Karate master", "the legs of the fastest demon in the netherworld", "the brain of Mahogany, a famous sorcerer", "the iron body of Hercules", and a "horse wiener". Laharl has an especially comical reaction to the horse wiener, saying "Now that's dangerous!". The Hercules Body, Mahogany Brain and Horse Wiener items can be stolen from the zombie in question.

His appearance is once again an NPC. He shows two promotional videos about Prinny: Can I Really Be the Hero

Aramis is a downloadable character in Disgaea 3: Absence of Justice. He can only be unlocked by scoring under 150 commands in the class world command challenge DLC mode. In his map here, he attempts to use various parts from the main cast in order to create the ultimate zombie. Despite this, Mao and Aramis quickly become friends, and Raspberyl even says "He (Aramis) is like Mao's brother." Aramis is hired, making him playable.

Aramis appears as the tutorial manager for the game. He also appears during the secret boss fight with Etna along with his "Ultimate Zombie". 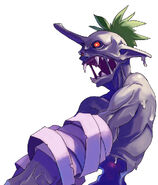 Aramis' Cut-in image in Disgaea 3.
Add a photo to this gallery

This article is a stub. Please help the Disgaea Wiki by expanding it, so it won't stay a little shrimp like Laharl.
Retrieved from "https://disgaea.fandom.com/wiki/Aramis?oldid=47777"
Community content is available under CC-BY-SA unless otherwise noted.