The Aqua Demon is a monster class in Disgaea 3: Absence of Justice. It is an amphibious monster with large tongues and powers over electricity.

Retaining its design from Disgaea 2: Cursed Memories, the Aqua Demon is a bizarre-looking demon. It is amphibious and looks very salamander-like, except that it has handle shaped horns sticking out of its body and no eyeballs. The horns are most likely used to sense movement during hunting. It has the ability to store up and unleash electricity. It also has some degree of magical powers. Unlike most monsters whose skills rely on the INT Stat, Aqua Demons have rather high Defensive abilities. Their native Evility, Mass Blaster, increases the damage they do for every square in a skills' area of effect that has an enemy in it by 10%. 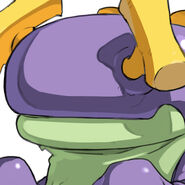 Aqua Demon's Cut-In Image
Add a photo to this gallery
Retrieved from "https://disgaea.fandom.com/wiki/Aqua_Demon_(Disgaea_3)?oldid=37167"
Community content is available under CC-BY-SA unless otherwise noted.