Almaz von Almandine Adamant is one of the main characters in Disgaea 3: Absence of Justice.

When Almaz is first introduced, everyone believes him to be a Hero who has come to defeat the Overlord. However, he is quickly outed as a "fake hero," and has his title stolen by Mao. Due to him have his title stolen, Almaz's speech is affected as well as his appearance, and Mao reveals that Almaz is slowly turning into a demon. He explains that after 666 hours have elapsed, the transformation will be complete. This horrifies him, especially after he learns that he'll never be able to turn back into a human if all of the time elapses. Almaz ends up joining Mao as his "servant," seeing that the only way to change back would be to find a way to get his title back. Nonetheless, his views on demons begin to alter as he spends time with them, making him realize they're not as purely evil as he believed. He also begins to consider Mao a friend, and starts sincerely aiding him in his quest

Eventually, Sapphire, the princess of Almaz's kingdom and his longtime crush, also enters the Netherworld, seeking to defeat the Overlord personally. She ends up joining Mao's party after the group rescues her from a group of demons. As the story progresses, Sapphire reveals that she recognizes who Almaz is, in spite of him believing that she only thought of him as another commoner. She later admits they had never really met, but she had heard his voice once when he had spoken up in her defense. Her mother had just recently passed, and due to some past trauma, she was unable to cry for her. Her subjects took this as indifference and criticized her, but Almaz saw through the exterior and defended her, pointing out that she had cut off a part of her hair. She then makes her affections for Almaz clear to him, much to his disbelief, and makes him promise to never die.

When Mao's party nears the headquarters of their (apparent) final enemy, a trap is laid in their path via a cute stuffed animal. Sapphire, unable to resist anything remotely cute, reaches for it. Almaz, however, realizes the danger, and sacrifices himself to protect his crush. He survives, but is placed under a powerful curse. The effects act quickly, but he forces himself to act completely fine so his friends won't worry for him. When others note that he is becoming paler, he passes it off as his demon transformation progressing. Unfortunately, the curse eventually begins to ail him more and more, ultimately culminating in his death during Mao's attempt to invade the human world. Before he dies, he apologizes to Sapphire for not being able to keep his promise. The party is stunned by this sudden turn of events, having so casually joked about his death not long before. Sapphire becomes distraught, mourning over both his passing and being unable to cry for him. She also blames herself for what transpired, as it was her inability to resist the trap that cursed Almaz.

Before anything more can be done, Mao's darkness manifests into a corporal body, and the group is forced to suppress it. Following its defeat, it reveals that they have Almaz to thank for their victory. After it is reabsorbed into Mao, he begins to express his own sorrow, angrily remarking that his "servant" had died without his permission, and commands Almaz to live. The deceased hero is then shown to be in some kind of limbo, where he humorously concludes he must be in Hell when an apparition of Mao appears. However, this spirit Mao, who possibly represents the "True Heart Mao," returns to Almaz his title, and thanks him for all that he has done. He even calls him "my friend," much to Almaz's surprise. He is then suddenly revived, completely human and with his original title restored. An overjoyed Sapphire begins to cry tears of happiness, and he rejoins the group.

Eventually, they come to face the true mastermind of all the events in the story, including Almaz's cursing: Super Hero Aurum, Almaz's childhood hero and the man he had always aspired to be. Although he can't believe such a legendary man could become so evil, he does not hesitate to fight against him alongside his friends. In the finale, he sees that Aurum is no longer the hero he once was, having ironically become that which he had fought against all his life. Fighting alongside Mao and his friends, the group manage to defeat him once and for all. He is briefly present when Mao makes peace with his father, and finally leaves the Netherworld with Sapphire after his friend becomes the new Overlord.

In the epilogue, Almaz and Sapphire marry. Much to his dismay, his new wife wishes to have their honeymoon in the Netherworld. He agrees, although with great reluctance. He, in a final narration, summarises that this will become a honeymoon that will never be, and that he'd probably be stuck in the Netherworld forever (humorously referencing the fact that the player can literally play the game endlessly). After defeating Marona, Sapphire accuses Almaz of falling in love with her and Almaz becomes very shocked and tries to convince Sapphire that he is only devoted to her, not Marona. Then after a little bit of argument, Sapphire states that she understands that he can't overlook a person in need because he's a hero and that she just wanted to tease him a little. Marona was unimpressed by all of this and felt like hurling after hearing all the lovey-dovey stuff.

If one defeats the final boss, Aurum, with only Almaz, and then defeats Mao in the following battle, Almaz is named the Overlord by Mao's dad (and, in a humorous turn of events, now has pretty much everyone except Mr.Champloo wanting to kill him).

If one defeats the Overlord again after the end of the second chapter, then Almaz is forced to remain a demon and Mao a hero. Amusingly, they cross paths again a year later, where Almaz is trying to mug another demon (all the while apologizing profusely).

In the "bad" ending of the game, Almaz is never restored to life after he dies. Sapphire's anger towards Mao's indifference over the tragedy prompts her to take part in an effort to violently suppress him.

During Laharl and Mao's duel he is the one who manages to get Laharl to admit his true intentions.

Almaz von Almandine Adamant is a hero fanboy, who knows everything there is to know about heroes. He's very passionate about them, however he has a hard time acting like one due to his lack of confidence. He is also easily distracted by loose change on the ground (shown in the first scene with him where his first line of dialogue was "Ooo, I found a nickel!"). Even though he lacks talent in becoming a true hero, when it comes down to it, he does his best. He has a crush on Princess Sapphire from the human world, and admires Super Hero Aurum. He dislikes demons because they do things like kidnap his princess. He wishes to become a great hero like Super Hero Aurum, so he can protect his princess from being kidnapped.

In term of relations to the other characters, Almaz plays the role of the straight man, because despite his quirks, he's the closest thing to a normal person in the cast, resulting in numerous moments of his sanity clashing with the zany antics of the other characters.

Almaz appears as Downloadable Content in Disgaea 2: Dark Hero Days. He costs $1.99 on the Playstation Store (so does Ash, Marona, Demon Lord Hanako, and Pram), and is free on the PC/ Steam version. Hanako summons Almaz in the summoning pot, Adell thinking he is the strongest warrior. Almaz, despite wanting to be a hero, says he is not at all. If Sapphire is in your party (obtained via DLC), she will come and tell him he is strong. Sapphire continues to nag him until she finally convinces him to fight Adell for her. He and Sapphire are newly weds in this game (Hanako's summoning appears to summon character's from the future, as shown by summoning Future Hanako). As a result the two of them have a combo rate of 99% at all times. If Sapphire is not in Adell's party, Adell forcibly fights Almaz. Either way, Almaz joins the party. He also has a new skill called "P Burgundy" which is a Blue version of the Psycho Burgundy attack used by Walnut, Castile, and Scarlet the Brave.

In Disgaea 5: Alliance of Vengeance, Almaz makes his first HD appearance along with Sapphire, being included with her in a DLC pack. Almaz retains his first two special skills from Disgaea 3, but gains the Infinite Graves special skill replacing Help Me Goddess. 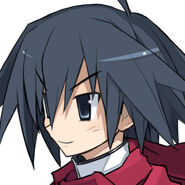 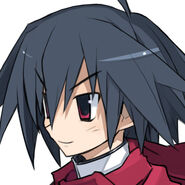 Almaz's portrait as a demon. 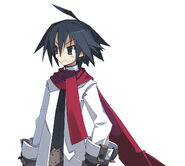 Almaz's Cut-In Image as a demon.
Add a photo to this gallery

This article is a stub. Please help the Disgaea Wiki by expanding it, so it won't stay a little shrimp like Laharl.
Retrieved from "https://disgaea.fandom.com/wiki/Almaz_von_Almandine_Adamant?oldid=47762"
Community content is available under CC-BY-SA unless otherwise noted.