“You know what, I'm not going anywhere till you're dead!”
—Alexander, Makai Kingdom Alexander is an Overlord from Makai Kingdom. Also known as the "God of Destruction", Alexander is Zetta's rival and has attempted to kill Zetta many times. Zetta has actually kept track: Alexander has sent 20846 assassins and has started 6413 wars with Zetta and still hasn't won. Zetta also refers to him as Alex, Alejandro and Asshat. He is extremely arrogant and egotistical, like most Overlords are, and is always ready to fight Zetta. Alexander is also the master of Raiden. Him and Zetta share a "friendly rival" relationship in the way that, despite countless death threats, Alexander saves his life two times at the story's end with no input from Zetta.

Alexander appears in Disgaea 2: Cursed Memories in the Omega Wind Spell and on Usagi and Pleinair's news show in between chapters.

In Disgaea D2: A Brighter Darkness, Alexander makes his first playable appearance as a downloadable character in the third DLC wave.

Laharl and company enter a field, looking for challengers to the throne. Flonne and Sicily debate the existence of a "Thunder God" until Alexander warps into the area, presumably lost.

Upon arriving, Sicily labels Alexander (By extension the "Thunder God" in general) as a "Belly Button Bandit," who supposedly steals the belly-buttons of children as they sleep. Etna is skeptical, and Laharl confused. Alex and the angels continue debating until Laharl gets angry and takes ther side. The group attacks Alexander shortly after.

After defeating Alexander, Flonne tries to convince the still-confused Alexander to reform from his belly-bandit ways. Humoring her request just to end the conversation, Alexander comments on Laharl's strength, and seeks to follow Laharl around until he can surpass him. He then joins the party from then on.

Alexander is a purely offensive character with extremely high ATK and HP Aptitudes, but sub-par ability in every other category. Alexander is excellent at using Axes, Spears, and Fists. His native Evility "God of Destruction" damages a random amount of enemies just before the player phase begins. 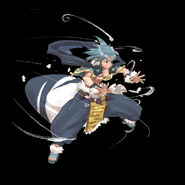 Alexander as he appears in the Omega Wind spell in Disgaea 2: Cursed Memories.

Alexander's battle sprite in 'Disgaea D2.
Add a photo to this gallery
Retrieved from "https://disgaea.fandom.com/wiki/Alexander?oldid=48181"
Community content is available under CC-BY-SA unless otherwise noted.