Adell is the main protagonist of Disgaea 2: Cursed Memories. He is a young human living in the town of Holt with his mother, father, his brother Taro, and his sister Hanako. He is known for his white sleeveless shirt with a raised collar and his red tie. He is the only human not affected by Overlord Zenon's curse, and vows to defeat Zenon and reverse the curse.

In every version of Disgaea barring the original Playstation 2 release, Adell can be fought twice in the Demonhall Mirror, first by himself and then with Rozalin. Defeating both causes Etna to predict that they are the main characters of the next Disgaea game, a suggestion that Laharl mocks. When doing team attack sometimes he use Yoshitsuna. In Disgaea DS, PC, and Complete, he and Rozalin will join the player's party upon being defeated, at level 2000 and 2500 respectively. Like Rozalin, he is treated as a Monster character in this game who specializes in ATK power, retaining his "Soaring Fire" and "Vulcan Blaze" skills from his other appearances.

Adell is not immune to the curse, as he thinks he is. He is actually a true-born demon, born from the Masked Man and the Masked Woman that he encounters over the course of the game. Mom and Dad know this, but the curse has stolen their memory of it. Because he is a full demon, the curse can't affect him, as it requires a Human Conscience to work, which Adell does not have. His demon heritage is hinted throughout the game; for example, he is able to get the titles of 'Demon Lord' and 'Badass Overlord', and also, during the Colosseum Chapters, Prism Red's Demon Radar identified Adell as a demon. Adell ends up falling deeply in love with Rozalin.

In the Best Ending of the game, Rozalin unleashes the Power of Zenon from within her and destroys the False Zenon. She then proceeds to set her wrath on Adell and the rest. Adell tries to get her to stop her rampage by talking to her and telling her that she is not alone anymore and she has people who care about her (and Etna). Rozalin does not listen to him, only repeating "I am a being of Solitude" over and over while threatening to kill him. Adell eventually kisses her, which not only releases her from Zenon's influence but also causes a humorous chase scene (as shown in the credits).

In the Worst Ending of the game, Adell fights and kills Rozalin after she unleashes the power of Zenon. He feels terrible but doesn't have long to think about it, since the Soul of Zenon leaves Rozalin's dead body and moves into Adell. The credits soon follow, showing only a blacked out image of what monstrosity the fusion has brought onto Veldime. After the credits, a voice-only scene plays showing Adell, now consumed by Zenon's power, attacking Hanako and Taro--not only killing them, but devouring them as well. In the Japanese audio, more graphic noises can be heard in this scene, but in the English audio, a long pause of silence plays after Adell attacked the two, cutting out the noises. Afterwards, Adell says "I am a being of Solitude", ending the scene and the game for that playthrough.

Adell also appears in Disgaea 3 as a downloadable character. In this game, he is bored due to there being nothing to do on Veldime beyond farm work. However, he finds an ad saying that Evil Academy is hiring teachers. He sees this as a chance to do something (as well as a chance to make some cash, as he is trying to raise money to buy Rozalin a gift). During the interview, however, he has a hard time answering the questions that Mao and the group are asking. Mao then challenges him to battle saying that if Adell can win, he can be a teacher (during the fight a remix of the main theme, "Sinful Rose", plays). Although Adell loses the battle, Mao is impressed by his skill and makes Adell become a student (thus making him playable). While playable, he is proficient in Fist weapons and deals more damage if he is fighting one-on-one. One of his secondary Evilities, Mercy, causes enemies that Adell has attacked to have at least 1 HP left, never actually defeating the enemy (which is good for training other characters).

Adell appears in Disgaea 4 as a DLC Character. He was released on November 21, 2011 in the U.S along with Rozalin.

In the interim between Disgaea 3 and 4, Adell set up a demon-extermination business within Veldime, where he'd go and take down any demons causing trouble. However, he ended up being so good at his job, he effectively put himself out of work. He then applies to Hades, hoping to put his skills at fighting to good use.

Noticeably, Adell's skills have changed up. Crimson Flame no longer moves him forward, instead hitting in a T-shape (one square forward, then three in a row) while needing one square behind him. He also switched out Soaring Fire for Soaring Shadow, which combines the Disgaea 2 fist skills Tiger Charge, King of Beasts and Rising Dragon into a single-target combo that sends the opponent behind Adell.

While keeping his Fair and Square evility, he now has Fist Range UP, adding +1 to attack range when a Fist is equipped, and Man of Passion, which has the equipped character deal more fire damage while receiving less.

Adell appears in Disgaea D2 as a DLC character. Etna tells Laharl that the Prinny Squad has found dimensional rifts which connect to other Netherworlds that hold demons who want to usurp his title. They go to the marketplace where Adell is shopping, and Etna states he matches the Prinny Squad's description of one of the usurpers and suggests that they should stab him in the back. Adell recognizes them and seems happy to see them, though neither Laharl nor Etna recognize him or care. Laharl accuses Adell of trying to overthrow him, but Adell denies this by saying he just wanted to buy some Meatopia chocolate bars but couldn't find any. Etna explains that the item is very rare, causing Laharl to get mad, proclaiming all the Meatopia chocolate bars belongs to him and Adell can't leave. Adell insists this is just a misunderstanding but to no avail, forcing them to settle things with a fight.  After the fight, Adell states that his brother and sister are waiting for the chocolate bars and he has to be back by dark. He promises that he only need to two Meatopia Chocolate Bars. Flonne nags Laharl to stop being mean, while Sicily makes Adell some candy bars and he joins the party as thanks.

Adell specializes in using Fists, and his evility Burning Spirit increases his Attack Power and Defense Power by 5% every time he targets a unit or becomes targeted by another unit. It maxes out at 100%.

Adell returns in Disgaea 5: Alliance of Vengeance as a DLC character, and is seen in a DLC story along with Rozalin and Axel in "C. Tournament"

Adell has a different skill set compared to D2, with only his skill Vulcan Blaze still in place. His Overload skill, Ameretat's Bravery Greatly strengthens his power by 200% and allows him to move 32 spaces for one turn.

He can execute a combination attack with Rozalin called Rising Ice Phoenix.

Courageous and determined, Adell dislikes demons and lies. His 'style' prevents him from backing down from a challenge or resorting to dirty tactics to win. This type of personality could be a result of his belief that he is human, and he is very much unlike any other demon protagonist in any of NIS games (other than Valvatorez). His love for challenging fights is taken to the extreme at times, earning him the name 'Battle Maniac' from Rozalin. Adell is also shown to be surprisingly intelligent when faced with a Geo Puzzle in The Coliseum. He is kind to those he cares about, particularly his family, and will never ever break a promise, as it's once again 'not his style'.

Also, according to DLC, Adell seems to be a hardcore fan of Pleinair.

All of his skills are fire based and increase with attack power. His love for brawling is portrayed in battle as a high affinity for Fists, although he is also proficient with Swords. Depending on the game, his roster of skills include Crimson Flame, Soaring Fire, Soaring Shadow, Combo Explosion Shot, and Vulcan Blaze. 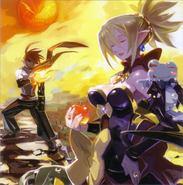 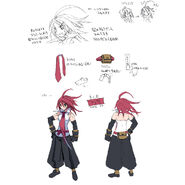 Adell Concept Art.
Add a photo to this gallery 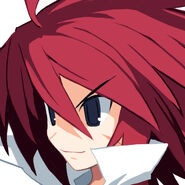 Adell's portrait in Disgaea and Disgaea 2

Adell's portrait in Disgaea D2
Add a photo to this gallery

Adell's Cut-in in Disagea 2.
Add a photo to this gallery

Adell's Cut-in in Disgaea 3.
Add a photo to this gallery

Adell's Cut-in in Disgaea 4.
Add a photo to this gallery

Adell's Cut-in in Disgaea D2.
Add a photo to this gallery

Adell's battle sprite sprite in Disgaea D2.
Add a photo to this gallery

Retrieved from "https://disgaea.fandom.com/wiki/Adell?oldid=48974"
Community content is available under CC-BY-SA unless otherwise noted.